Whenever it comes to describing what my main characters look like, I always clam up a bit. Maybe it’s because I write in first person, so I’m basically living in their heads, and it all feels a little like describing my own appearance. (Which, ugh, am I right?) But moving past that, it’s also one of the funnest parts of dreaming up a character. This person you created can have a face! Any face! And curly hair or pink hair or no hair!

Normally, I have a pretty good sense of what my character looks like from the start, and it was no different for Cloudy. I knew she was an interesting shade of blonde, that she was petite but not under 5’4, and that she had the face of someone you almost want to punch. Almost. Which, you know, sounds like a good foundation for a human being. But since Mindi would also need to envision Cloudy, we figured something more specific was in order.

I Google Imaged my heart out, eventually finding that I wasn’t really happy with any of the potential Cloudys. It was all very frustrating until I remembered that I might already have one at my disposal. . .

I’d saved this photo years ago, assigning her to another character I was writing at the time. Aside from the guilt I felt at stealing said character’s identity, I knew the girl in this photo had a distinct Cloudy-ness to her.

I wish I knew who this real girl is! If you do, share? 🙂
Photo credit: Elle Girl Magazine

See?! This is just the kind of photograph someone would take of Cloudy. (Maybe at a party where there are old birdcages and free-range oranges?) She’s got that look in her eye, that I-dare-you-to-mess-with-me look; that I-am-untouchably-cool-in-a-rocking-chair quality. Which is so utterly Cloudy, you guys, you don’t even know.

Unfortunately, her hair color isn’t exactly that shade I’d imagined. And her eyes might be the perfect shade of Cloudy, but, well, I can’t see them too clearly. After a little random searching on Pinterest, I found something close to what I was looking for: 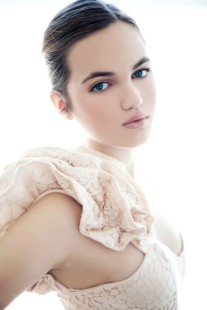 The caramel-y blonde of Brigitte Bardot’s hair was definitely getting warmer. And the girl on the right? Her dark blue eyes were pretty much exactly what I was looking for! High five, Pinterest!

Of course, it can be hard work to Frankenstein these actual human beings into resembling your imaginary character. Those are the times when you have to take matters into your own hands by picking up your Wii remote. (That We Cheer 2! Always helping with the research.) So, I made my very own Cloudy, as best I could.

Look at her, all smiley! But I don’t really get the white streaks in her hair — the game decided to add those in. Hmm. Does it think Cloudy’s stressed?

ETA: GUESS WHAT EVERYONE? The lovely model in the chair is: Devynne Scilingo! Thanks to Catfish: The TV Show for inadvertently solving my troubles, along with being totally gripping. High five!