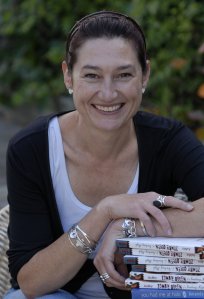 Amanda Ashby has a new middle-grade series called Mixed-Up Magic, which sounds very fun! The first two books were released simultaneously on May 30th, and today Amanda answered some Very Important Questions for me about herself and her series!
A
At age eight, what did you want to be when you grew up? And at age eighteen? And while you’re at it, what about at age twenty-eight?
Amanda Ashby: I honestly and truly had NO career aspirations growing up. I just wanted to read books and watch television but my parents didn’t seem to think this was a valid career choice so I went to University and studied journalism, but it wasn’t until I was twenty-eight (truly, I’m not making this up) that I suddenly decided that I wanted to write a book. Looking back, the clues were all there but I just hadn’t managed to piece them together (I’m a slow learner).
a
Which Breakfast-Club-style label would have best fit your teenage self?
AA: I loved that movie. In fact I loved all of John Hughes’s movies. I was probably somewhere between basket case and princess. I wasn’t spoilt at all but I could so relate to Molly Ringwald and her lipstick trick!
a
Without giving away too much from your newest book, which character or scene from it are you the most pleased to have created, and why?
AA: When Sophie gets turned into a djinn, she also gets stuck with a ghostly djinn guide called Malik. He was so much fun to write and he is constantly getting her into trouble. One of my favorite scenes was when Malik read one of Sophie’s history book and was outraged to discover how people think World War One began. He then proceeds to tell her the real reason, which, as it turns out is all because of Moroccan almonds!!!!
a
Which are your favorite movies to watch again and again?
AA: Princess Bride, Clueless, Pretty in Pink, Star Wars, Sense and Sensibility (Emma Thompson and Kate Winslet are two of the best actresses EVER and to see them in a movie together is just the stuff of dreams!)
a
And, now, the most important question of all: Beatles or Elvis? Please support your answer. 😉
Beatles because my husband is from Liverpool and not only did I live there for about six years, but one of our houses was just down the road from where Ringo was born (okay, yes, the area was a dump but it was still cool!). I also happen to love Scousers. Their humor is so unique and the idea that those four guys went onto change the world is pretty cool. Though I do have a lot of Elvis love and I might even own a gold Elvis car ornament!
a
________________________________________________
a
Sophie’s Mixed-Up Magic, a middle grade series by Amanda Ashby

Be careful what you wish for…
After eleven year old Sophie accidentally gets herself turned into a djinn, she starts to think that it might not be so bad after all. (Of course, that’s after she gets the whole orange skin problem sorted out.) Who wouldn’t enjoy having the power to grant wishes! But when Sophie develops RWD (Random Wish Disorder) and can’t STOP granting wishes, things get more than a little mixed-up!

Book Two: Under a Spell (May 31st Puffin)

And that spells T-R-O-U-B-L-E…
As Sophie gets used to her magic, her relationship with the adorable Jonathan Tait is blossoming. There’s only one problem: Jonathan’s twin sister, Melissa. She’s a total mean girl who seems intent on making Sophie’s life miserable. On top of that, Melissa somehow seems to sense that Sophie has powers–and manages to bind Sophie to her in a totally self-serving way. Can Sophie figure out a way out of this–without ruining her chances with Jonathan?

Watch out for book three in October…

About the author: Amanda Ashby was born in Australia and after spending the last sixteen years dividing her time between England and New Zealand, she’s finally moved back and now lives on the Sunshine Coast. When she’s not moving country, she likes to write books (okay, she also likes to eat chocolate, watch television and sit around doing not much, but let’s just keep that amongst ourselves, shall we?)

She has a degree in English and Journalism from the University of Queensland and is married with two children. Her debut book, You Had Me at Halo was nominated for a Romantic Times Reviewer’s Choice award, and her first young adult book Zombie Queen of Newbury High was listed by the New York Public Library’s Stuff for the Teen Age 2010. Her latest release, Fairy Bad Day, has been selected by Voya as one of their Top Shelf Fiction for Middle School Readers 2012 and is a SCBWI Crystal Kite Award finalist for the Australia/NZ region. To find out more, please go to http://www.amandaashby.com