Following Mindi’s (and Charlie’s) example of listing their 5 Best Moments, I’ve come up with my own! I’m calling my list the 5 Best-ish Moments of My Life. Not that these don’t qualify as Best (no -ish) Moments, because they do! And I’m so very lucky to have them and snuggle with them on the hard days. But it’s just tough to commit sometimes, so this is my way of wiggling out of it. 😉

The 5 Best-ish Moments of My Life

College was not the most well-spent four years of my life. I mean, I met wonderful friends, took fun classes, and ate an entire Entenmann’s Chocolate Chip Loaf while watching Buffy in my dorm room. So, you know, not a total waste. But I also had zero idea what I wanted to do post-college, and this made caring about my classes a non-issue, and panic attacks a common thing. By senior year I knew-ish that I wanted to write (back then it was for TV), but it was way too late to switch things up (I was already feeling the crushing weight of my student loans). So, I chose a major in the subject where I’d wracked up the most credits, and got the go-ahead to graduate! Happy day!

In the fall of 2001, my hometown was unlike anything I’d ever imagined. In the midst of all this, my cousin and I had tickets to see U2 in concert. Now I can’t remember if I was nervous about being in such a big crowd, or how extensively we were searched before we were allowed into MSG. But I do remember how it felt being in that arena, so symbolic of New York City, with people who were feeling what I was feeling. People who knew what it meant to be there, together, healing and singing and screaming and chanting “Let’s Go Yankees” at one point. And mostly I remember the moment when the band played “One,” and a list of names began scrolling. (I still get chills whenever I think about it.)

Sometime in Seventh Grade: I Refused to Be a Shrew

I’m kind of bummed that I don’t remember the exact date this happened because it most certainly is one of those Big Moments. But in seventh grade, two of my closest friends turned into total harpies. I was considered a “nice girl” and they took this as permission to torture me daily because I probably wouldn’t argue back. IT WAS SO AWFUL. Being humiliated at the hands of two people who were supposed to be on my side. (See also: my trust issues.) But finally (finally, finally, finally), while we were working on group projects in class, I’d had enough. I stood up for myself. I told them not to bother talking to me again, got up from my desk, and left them, jaws dropped. I still remember the “way to go, Michelle” look on a classmate’s face as I did this, and the relief and pride that coursed through me. Nice girls aren’t pushovers, you see. 😉

This is sort of a cheat because California was not one but Very Many Best Moments, but, really, why choose? And while I’m chock full of neuroses like any good New Yorker, I’ve always felt like a teeny part of me belonged to California. Which is stupid! I’d never been to California! But I’ve always felt that certain people are drawn to certain places for inexplicable reasons, and California is one of my places. So, obviously, I jumped when I got the chance to go. And it was AMAZING. I ate fish tacos in Laguna Beach! I took surfing lessons in San Diego! I fell in love with Santa Monica, and the tiny cafe near our motel, and with all the newness of California, it still felt a little bit like coming home. (But NYC is cool with it!) 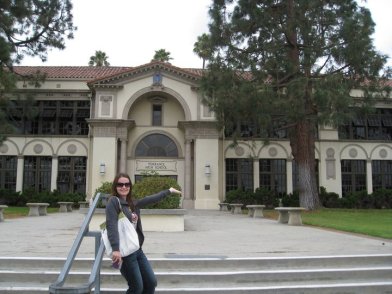 I’m at Sunnydale High!! Xander fell down those steps!

I did a lot of writing after college graduation, but I wasn’t sure if YA novel writing was something I should pursue as more than a hobby. So, I decided to take an online writing class through MediaBistro and let me tell you, it was TERRIFYING. There were so many talented writers and, along with them, so many great ideas for their books. Better than me and mine, for sure! Still, I was learning so much that each compliment and criticism felt like money in the bank. In that class my instructor and classmates made me believe a writing career could happen. For me! For real! I remember pulling a coat from my closet and reflecting on the class when I thought how this was an incredible overlap of something I loved to do and something I could do. How rarely that happens. And it’s a feeling I pull up on the hardest of writing days, one that’ll stick with me no matter where my career goes (or doesn’t go!).