I’m so excited! Michelle and I have a brand-new feature here at our blog called “YOU ARE HERE.” Michelle came up with this great name, and I love it. Hooray!!!!!!!

Since the novel that we’re writing together (FAR FROM US) includes a road trip, we’re going to feature photos on this blog from our own travels as well as photos submitted to us from some of the authors we know. Each photo will also have a few paragraphs of explanation. We thought this would be a really fun way to see new places and “hear” about where others have been. 🙂

Here’s our first photo to show off! 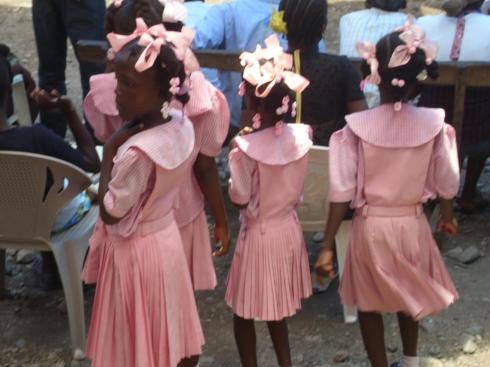 “I took this photo in a small town in Haiti last year. It was my first ever trip to Haiti and I was so excited to be there. I was with a group of Haitian-American and Haitian-Canadian people who, like me, had been raised with the language, food and culture of Haiti, but had never visited the country. My parents emigrated to the US from Haiti the decade before I was born, but they instilled in me an understanding of the culture and knowledge of Creole and French, so I was able to wing it (somewhat) while I was there.

During our tour through Haiti’s gorgeous mountainsides and into various villages, large towns and cities, I was struck by the colorful ribbons I’d see adorning the hairstyles of countless school girls along the roads. It was like they all had candy-colored butterflies atop their heads. And the ribbons were not just worn by the younger girls, but also by tweens and even girls in their early teens! It was almost as if childhood lasted a lot longer in Haiti than it did in the neighborhood where I grew up in New Jersey. The girls in this photo are singing along to the praise music at an outdoor church. Though the church was completely destroyed in the earthquake and remained but a stone shell (minus the roof!), there was tarp overhead and plastic chairs assembled, along with a portable sound system. The place was packed and everyone was joyously worshipping and giving thanks. I couldn’t walk by without snapping this photo.”

Debbie Rigaud began her writing career covering news and entertainment for popular magazines. Her YA fiction debut, HALLWAY DIARIES/Kimani Tru was followed by the fish-out-of-water romantic comedy PERFECT SHOT/Simon Pulse. Since then, Debbie’s non-fiction essays have been published in anthologies IT’S ALL LOVE/Broadway Books and DEAR BULLY/HarperTeen. Her short story “Voila!” is featured in OPEN MIC/Candlewick Press, and TURFQUAKE, her first YA e-book will be released late 2013.

About OPEN MIC
Listen in as ten YA authors use their own brand of humor to share their stories about growing up between cultures. Edited by acclaimed author and speaker Mitali Perkins, this collection of fiction and nonfiction embraces a mix of styles as diverse as their authors, from laugh-out-loud funny to wry, ironic, or poignant, in prose, poetry and comic form. www.facebook.com/openmicanthology

About “Voila”
Thanks to overprotective parenting, Simone’s elderly great aunt Ma Tante has more of a social life than she does. But one afternoon, Ma Tante’s social scene awkwardly intersects with Simone’s in the unlikeliest of places.

One thought on “YOU ARE HERE with Debbie Rigaud”