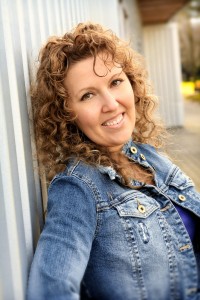 I’m very excited today because Denise Jaden’s second novel, Never Enough, came out this week! I first met Denise Jaden in the summer of 2009, shortly after we’d both gotten book deals for our debut novels with Simon & Schuster.  Denise it totally my “publishing sister.” 🙂

To celebrate the release of Never Enough, Denise is  having a really great book giveaway. Four boxes of books! All you have to do to enter is leave a comment at the very bottom of this interview. For additional entries, and to learn more about the prizes, click here on Denise’s blog!

And, of course, it wouldn’t be an interview-ish post without Denise’s answers to the Very Important Interview-ish Questions. So here we go!

At age eight, what did you want to be when you grew up? And at age eighteen? And while you’re at it, what about at age twenty-eight?

Denise Jaden: At age eight, I’d just started Polynesian dancing, so I probably wanted to be a professional dancer (which I am!). At eighteen, I went off to theatre school, hoping to become an actress. At twenty-eight, I just wanted to do anything that would allow me to travel and see the whole world.

Which Breakfast-Club-style label would have best fit your teenage self?
DJ: I was the Drama Queen, very involved in drama classes and plays at school, but also fairly melodramatic about anything that came my way.

Without giving away too much from your newest book, which character or scene from it are you the most pleased to have created, and why?

DJ: I LOVE the last scene in my book, and to be honest, it is probably the newest scene I have written and was added in my very last revision. Because of the place I was at in my life personally when I wrote it, I think much of the emotion in there is very authentic. I can’t tell you any more than that without spoilers!

Which are your favorite movies to watch again and again?

DJ: The Matrix, The Princess Bride, When Harry Met Sally

And, now, the most important question of all: Beatles or Elvis? Please support your answer. 😉

DJ: This is a tough one for me! I probably like the music of the Beatles more, especially their earliest stuff, but Elvis had the moves!!! 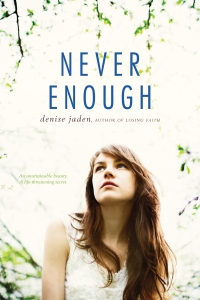 About Never Enough:
Loann’s always wanted to be popular and pretty like her sister, Claire. So when Claire’s ex-boyfriend starts flirting with her, Loann is willing to do whatever it takes to feel special…even if that means betraying her sister.

But as Loann slips inside Claire’s world, she discovers that everything is not as it seems. Claire’s quest for perfection is all-consuming, and comes at a dangerous price. And Loann is frightened she could lose the sister she’s always idolized.

As Claire increasingly withdraws from friends and family, Loann struggles to understand her and make amends. Can she heal their relationship—and her sister—before it’s too late?

About the author:
Denise Jaden spent her high school lunch hours trying to tame her frizzy/curly hair in the bathroom, or playing freeze tag in the drama room. She attended the theatre program at college, and then enjoyed a variety of occupations, including stage production, mushroom farming, and Polynesian dancing. The first draft of her debut novel, Losing Faith, was written in 21 days during National Novel Writing Month. This is her second novel. She lives just outside Vancouver, Canada with her husband and son. Find out more online at
http://www.denisejaden.com or on Twitter: @denisejaden

4 thoughts on “All about Denise Jaden and NEVER ENOUGH”